What is the trick to latch action toggle clamps? 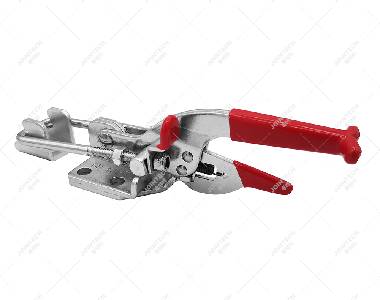 Fantastic things can happen when both ends of a link are connected by pins. That is, the force at the end that is not in a straight line causes a movement around the other end. As neither side can support the movement, the whole system will be extremely unbalanced. A double pin linkage in equilibrium can therefore generate forces along the line between each connection.

It is not as complicated as you might think. The structure consists of a series of two-pin links. When you get to the clamping position, the links are correctly aligned and the clamping force is in a straight line along with the link. You can then lock the latch action toggle clamps.

In addition, you can modify this arrangement to lock in the open and closed positions. You can do this when the pins in the linkage and the handle are away from each other. The connecting rods will not only be aligned horizontally but will also resist the force from the clamping arm. Similarly, the release action will be perpendicular to the clamping force. But it is different. The handle will be in tension, not in compression. In addition, the other links will remain in compression.

Crank-slide mechanisms and rotary clamps are subject to potential problems such as manufacturing tolerances and vibrations that may lead to misalignment. As a result, forces will be released which could lead to the potential failure of the system. The system is susceptible to these problems because of the high clamping force and the low release force. Even a small amount of clamping force towards the lock can quickly result in a release. Latch action toggle clamps are designed to over-clamp. This means that the locking position is outside the industry standard.

Jointech Industrial Co., Ltd recommends that you learn the above tips so that you can easily use the latch action toggle clamps.