What is the principle of the latch action toggle clamps? 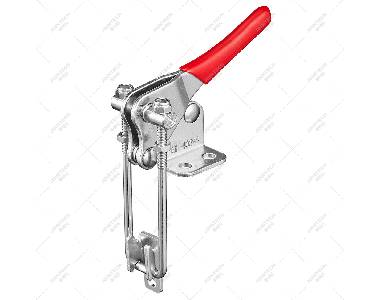 The latch action toggle clamp is based on the mechanical principle of a double rocker mechanism in a flat four-bar mechanism, the basic structure of which consists of four components, including the connecting rod, the frame, and the two connecting rods. When the two hinge points of the connecting rod and the frame rod and the hinge point of one of the connecting rods and the frame, the three points are in a straight line, the mechanism is in a dead position. At this point, the pressed workpiece, no matter how great the counterforce (except for destructive counterforce), cannot be loosened by the press head, which is the dead point clamping principle in mechanical mechanics. To avoid the effects of external load changes and mechanical vibrations in use, the middle hinge point is designed to be slightly offset to the inside of the line connecting the other two hinge points to ensure that the latch action toggle clamps are always locked in a stable state without loosening under maximum central tightening force. Therefore, compared to older clamps, the latch action toggle clamps are convenient and efficient and can greatly increase efficiency during flow operations.

The latch action toggle clamps are simple and easy to install. The clamped workpiece can be loaded and unloaded quickly and easily. All parts are electroplated and rust-proofed for a clean and beautiful surface. For heavy-duty clamps, the key parts are heat-treated by the process to give them high strength and wear resistance. Latch action toggle clamp central tightening force is the maximum pressure of the press head on the workpiece when the fixture is in the locked position and no mechanical deformation is produced. This pressure is generated when the press head is adjusted to the nearest position on the force arm to the mounting base. The pressure of the press head on the workpiece is not constant, it varies with the position of the press head on the force arm. The clamping force decreases as it moves away from the mounting base.

Jointech Industrial Co., Ltd is a research, development, manufacturing, and sales company that has been specializing in the development of latch action toggle clamps for over 20 years. Through continuous accumulation and innovation, we have become a new type of company with strong technical capabilities and standard management. With the help of precision CNC machines and skilled staff, our products are sold in more than 40 different countries. We welcome your contact.