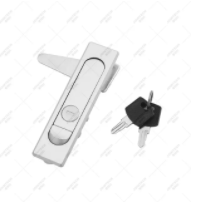 Toolbox latch is used in a variety of toolboxes, tool cabinets on a buckle, or latch lock, generally used with hinges, pulls, and other hardware. Toolbox latches mainly play a quick open and close role.

l The role of latches

l Use of latches

The role of latches

Toolbox as a frequent occurrence in daily life, it can store some tools, often moved around, it may be used indoors, people outdoor or more harsh environment, but also may need to open and close frequently, toolbox buckle is an important accessory to solve a series of problems of the toolbox. Toolbox latch is frequently used, mainly because of its unique functional performance, can be better than the role of the high toolbox.

The included latch can protect your valuables. It is suitable for both indoor and outdoor applications. It is suitable for a variety of small to large projects. Great for use with boxes, drawers, chests, cabinets, trunks, briefcases, coolers, folding tables, closets, barrel covers, craft projects, and components, and more. In addition, you can use it in chicken coops, beehives, restaurant applications, and more.

Latches are relatively simple to use and generally have a body section and a hook section. After installing the hitch lock, you can snap the buckle of the main part on the hook and then press the handle of the main part.

When installing the latches, you should pay attention to the distance between the overall part and the hook part, which should not be too big or too small. Therefore, in general, we recommend that the installation is best to determine the distance on-site to lock the safety hitch. Hitch locks are used on some box structures, such as toolboxes, test boxes, soundproof boxes, or when two objects need to be fastened together.

Box buckles can fasten two parts together and release them quickly so that the two objects can be combined or separated quickly. Some simple seat belt buckle locks can even be adjusted, we call them metal adjustment buckles.

If you are interested in our products, welcome to buy our products.In the past 20 years, we have been focusing on the development of toggle clamps, toggle hasps, hose clamps, and CNC precision machining components. Jointech offers all types of fixtures for customers, not only provides all kinds of universal fixtures but also being able to produce customized ones as per customer's requirements.