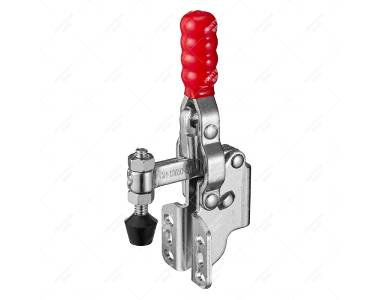 What is the principle of Vertical Toggle Clamp?

What is the principle of Vertical Toggle Clamp?

First, it satisfies the stability and reliability of the positioning of the workpiece during use. Second, there is sufficient load or clamping force to ensure the processing of the workpiece on the Vertical Toggle Clamp. Third, it meets the requirements of simple and fast operation during the clamping process. Fourth, the fragile parts must be of a structure that can be quickly replaced, and it is best not to use other tools when the conditions are sufficient. Fifth, it satisfies the reliability of the repeated positioning of the Vertical Toggle Clamp during adjustment or replacement. Sixth, avoid complex structures and high costs as much as possible. Seventh, use standard parts as much as possible. Eighth, form the systemization and standardization of the company's internal products.

In the process of mechanical design and manufacturing, dimensional chain problems are common. In the process of assembling parts into a machine, that is, the relevant dimensions of the parts are combined and accumulated. Due to the manufacturing errors in the size of the parts, there will be integration and accumulation of errors during assembly. The total error formed after accumulation will affect the performance and quality of the machine. This forms the mutual influence between the dimensional error and the comprehensive error of the part. The design of the Vertical Toggle Clamp is no exception. It is very important to determine the dimensional tolerance and geometric tolerance of the part reasonably.

If you are interested in our Vertical Toggle Clamp products or have other needs, please feel free to contact us. Our official website is https://www.toggle-clamps.com/. Our cost-effective products will bring you a better experience.